Out of desperation, I tried acupuncture while in Blackheath. My lower back was in terrible shape. It started hurting in Amsterdam, and in Paris I was in real pain. I can only assume the long days driving in the car over the previous few weeks threw it out of alignment. I started taking ibuprofen in Paris and used a back pain patch, but that just made it bearable. By London, the pain was intense again. I could barely walk. The afternoon at the Tower of London was awful, I was shuffling and limping like an old man. I was extremely worried that this would go on for the rest of the trip, I was in my second week of misery and not feeling at all that whatever was wrong was going away. There was an Osteopath/Acupuncture sign over a herbal medicine shop on the main street of Blackheath. I went in asking about Osteopathy, I assumed it must be something like what a chiropractor does. The woman said I needed acupuncture, so I tried it. I felt immediately better after the first session. I went again the next day, and felt further improvement. The pain was totally gone, but I had to watch how much I walked because my back would start to fatigue – not really pain but a feeling of weakness. I went a 3rd time on Monday. By this time I was back to my normal gate when walking, and could actually move quickly, for example when crossing a street. Even after the long 13 hour flight from London to Singapore, I arrived in Singapore with my back feeling fine. I am a convert to acupuncture now! It really healed my lower back problem.

After months of sleet, snow, rain and freezing temperatures, we got our first sight of Spring yesterday in Greenwich Park.  Bob was just commenting that we would probably miss the bloom since we leave London on the 14th. Lucky for us, one little flower was in a hurry. 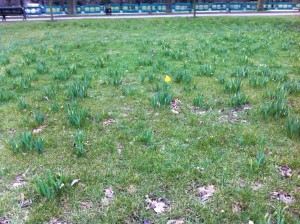 Now that our trusty pack mule – the Kangoo – is no longer with us, we are back to carrying everything when we move and using public transportation. Today, we were travelling from the 1st Arrondisement in Paris to Blackheath, which is in the southeast of greater London. We started with a half hour walk to the St. Michel-Notre Dame metro station. Why, when the closest Metro stop was only 1 ½ blocks away from our apartment? L’Amour, of course!

Along the way is the Ponte des Arts, famous for the padlocks on the handrail’s steel mesh. Lovers pledge their eternal love by locking the padlock to the bridge and throwing the keys into the Seine. I had bought a hand painted padlock here for Gigi back in September. We had waited until our last moments in Paris to do the deed of eternal love pledging and key tossing.

Its not like we were unsure about what we were doing, we 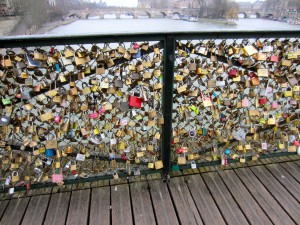 just were never near the bridge during all our time in Paris this trip. (Honest) We had to do it before leaving. The boys giggled; they were really enjoying the ceremony of us adding our padlock to the thousands of others on the bridge. So, on with the travel tale…

We had a straight shot from St. Michel to Gare du Nord on the RER B line; the real issue was wandering the underground maze trying to figure out what platform we needed to be on, and the stairs. You do not see wheelchairs or seriously handicapped people in the Paris Metro. With as much luggage as we are carrying, stairs 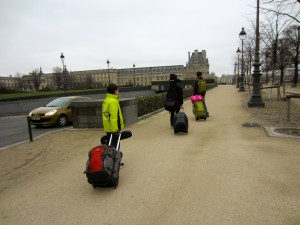 are a killer. Justin could not pick up and carry his bag, so either I doubled back to help or a stranger helped him carry it before I could, which happened twice.

We missed our 1:13 Paris – London Eurostar train because we misunderstood the boarding time and were stopped at the gate with the statement that boarding had closed 10 minutes earlier. This Eurostar leg is a lot like being at an airport and getting on a plane. Ticket check, baggage scan, passport check, waiting lounge, assigned seating. We were able to get on the 3:13 train and zoomed westwards to London. Jordan and I played several games of Risk on his iPad. Even acting as allies, we had a hard time beating the computer’s players. Having baggage on this train was not so bad. They have a sloping moving walkway instead of an escalator to bridge the elevation differences of the train platform and waiting area. There were enough luggage racks for our bags in the train compartment. As I was loading baggage onto the train, I did take a nice, slow motion tumble stepping from the train when my foot slipped into the open air between track and platform and I fell sideways all the way to the ground and almost went under the train to the tracks. Absolutely no harm done, and I got up with a nervous laugh meant to hide my embarrassment.

Once we arrived at London St. Pancras, we were back into the bustle of moving rivers of humanity, and stairs and escalators. It was rush hour, a lovely time to be carrying luggage in the tube. We moved through fairly efficiently and took the Northern Line to London Bridge station. We got on the tube easily enough, plenty of space for our luggage, but the first stop brought a crush of humanity into our car, and for the next 4 stops we were overdressed sardines. We were wearing all our heavy jackets, and it got uncomfortably toasty.

We disgorged at London Bridge and made our way over to the Southeastern Railway platforms to catch a train to Blackheath. We managed to find the right platform the first time, and a conductor on the platform confirmed we were getting on a train that did stop in Blackheath. Yes! 5 minute wait for the train to arrive, then 3 stops later on a not-too-crowded train we were on the sidewalk of Blackheath in the twilight. The final 10 minute walk we did without a map and only 3 street names to guide us. I asked directions 3 times from passersby to make sure we were going the right way, the last one a lady walking two border terriers who had a smartphone and Google mapped our address to make absolutely sure she was giving us the correct directions. We had not had the chance yet to switch over to an English simm card for our iPhone, and this little encounter reminded us we needed to do it. So handy!

Thank God we are staying in one place for the next two weeks.