My swedish friend Per texted me that if I was in Singapore I would have to get a drink at the bar at the Raffles Hotel. Apparently, he had tried to do this, but was denied admittance because he was wearing shorts. I would have a drink at Raffles for him. 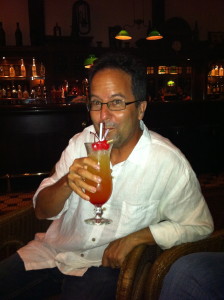 Bernie, Pearl, Gigi and I went out for a Saturday evening of music on the town last night. We heard some great blues and rock and roll at a place called the Barber Shop. This restaurant club is located behind the Asian Civilizations Museum in the old British administrative area of town. Saturday night was jam night, and several guest players were taking turns getting up and playing.  The quality of the music was excellent for a bar band. Drinks were 18 $Sing! (almost 15 $US) When the band took their break, we paid our bill and took a walk over to the Raffles Hotel.

The walk over to Raffles passed the white painted cathedral on our left and the town’s cricket pitch on the right. The historic buildings were all only a few stories in this district. Looking at the high rises flanking this area, Bernie made the comment that the land value of the cricket pitch was probably one billion dollars. The Raffles Hotel was another two story, white colonial building with dark stained wood accents.

We found the Long Bar at the back of the building. It was maybe half full with patrons, and a band was playing on the upper floor. I ordered a Courtyard Singapore Sling, which had lychee flavoring in it. It was bloody awful! I could not believe that the bar that was famous for inventing the Sling would produce such a sickly sweet, unbalanced concoction. And it cost 26 $Sing!!! This was the most expensive drink I ever had. Ah well, I was in a lighthearted mood, and instead of sending the drink back I braced for its syrupy thickness as I focused on the flavor of the lychee each time I took a sip. What the hell, it  was only one drink.

As we munched peanuts and threw the shells on the floor, a kitchy lounge band was playing an interesting set of tunes from the sixties and seventies: Three Dog Night, Louis Armstrong, Tina Turner, Journey, Joe Cocker. Entertaining, but not danceable. Gigi and Pearl really wanted to dance tonight. (The Barber Shop had no dance floor.) The lead singer was tall and lean with a toothy smile, open shirt with gold chain, and had all the understated, cool moves of a veteran lounge singer, which to me was a bit incongruous with his dark skin, wide nose and afro. I just don’t associate Papua New Guineans with lounge singers doing a passable cover of Joe Cocker’s ‘Try With a Little Help from my Friends.”

A very enjoyable night out on the town in spite of the two drink 44 $US bar bill. Oh yeah, and this was the first time Gigi and I wore our jeans in Singapore.

Singapore has been our base and home in SouthEast Asia. In total, we are spending a month here with our friends Bernie and Pearl. Really, the boys favorite thing to do here is to chill out in the house and play Mindcraft. But hey, they can do that anywhere, so we are constantly pushing them to ‘get off the screens’ and go out and do things. A trip to an air 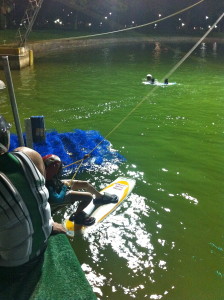 conditioned movie theater easily motivates them. We have seen Iron Man 3 and The Croods with them. This is a real treat for the boys, as we have not gone to see hardly any movies in theaters on this trip. But there you go again, something that we can do at home. Not really special to Singapore.

Ski360, I would say, fits the bill as an activity that is especially Singaporean. It is modern, water-based, and athletic; a venue that is our boys favorite place in Singapore. Ski360 is a cable tow wake boarding venue. The cable runs above a huge salt water lagoon that is dotted with skate park style ramps and jumps. Maybe 6 people can be out wake boarding at the same time. It is the size of two football fields. Fall on the far side of the lagoon and you have a long walk back to the starting point. There is a launch ramp that everyone takes off from. Music is blasting from the sound system. Young people with blond dyed hair and ear lobe plugs fit you with the gear.

Ski360 is located in East Coast Park. A wide promenade separates the lagoon from the ocean where hundreds of cargo ships are anchored, waiting their turn at the container port a few miles to the west. Just beyond the far end of the lagoon is the East Coast Lagoon Food Village.

Our first visit to Ski360 was on a Friday evening. Jordan, Justin, Izzy and I all went wake

boarding. Jordan and Justin have had one chance previously to wake board at Lake of the Pines prior to this. Neither could get up. I wondered how this was going to turn out for them. We all started on Easy Up boards, which have a high foam content and thus are more buoyant than  regular wake boards. I got up on my second try. The tow rope gives quite a sudden jerk when it engages with the tow cable. It took Jordan maybe 10 dogged attempts, but he finally got out on the water. Justin never did get up, but he did not consider this a negative in any way. He would pop his face up and and with a big smile immediately start talking about what just happened as he paddled the twenty feet back to the ramp. He never got tired of crashing. It was the ‘best time’ according to him. Jordan meanwhile was trying to make 5 loops around the lagoon, which was not easy. In addition to us simply being very unsteady on the boards, there were 5 turns to the cable circuit that 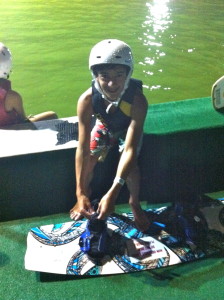 really whipped you, and often at these junctures we novices were most likely to fall. The boys boarded for two hours, past sunset.

When we were done, we all went to the ECL Food Village for a hawker meal dinner. The evening was pleasant and the place was packed. We ate a smorgasbord of chicken satays, grilled stingray, wok fried noodles, beef rib soup, and chicken rice.

The next Friday found us visiting Ski360 again. The boys had been asking for it all week. This visit Jordan upgraded to a regular, finned wake board. Over the 2 hours he logged 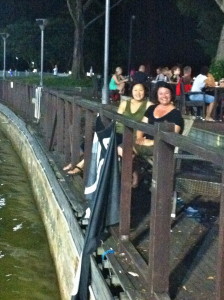 lap after lap on the lagoon. Justin never did make it up, but that did not matter. He found a New Zealand expat 9 year old boy who was having similar difficulties with the wakeboard. They traded their wake boards in for a knee board and got out on the lagoon as a tandem. They never made it around the first turn, and always had a long walk back, but they really didn’t care. They enjoyed wiping out.

When we get back home, I know we will be spending time at Gigi’s family house in Lake of the Pines. The boys will be knocking on the neighbor’s door, asking Paul if he wants to take his boat out on the lake so the boys can go wake boarding.